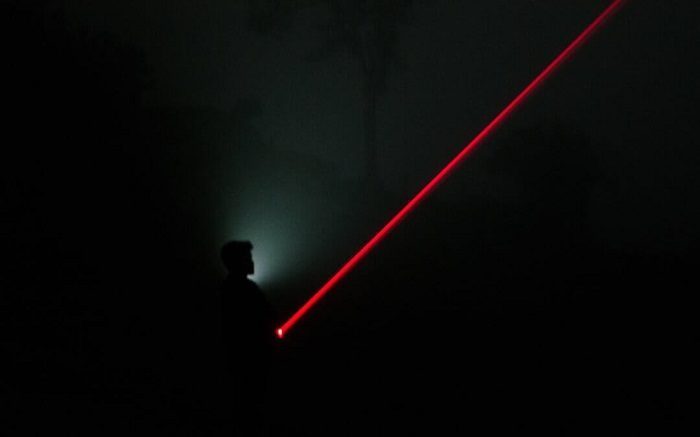 A laser is a device that stimulates atoms to emit light and amplifies the light. It is a different source of electrical energy as all the light waves have similar wavelengths which enable the light to be focused, very bright, and very narrow. Lasers do not occur in nature, they are an artificial light source that has found various uses in science today. Lasers are classified based on the amount of damage they cause to the eye. The FDA offers the following classification;

Due to the focused nature of the laser beam, the type of light it produces can be hazardous to cameras and the naked eye. It is not particularly illegal to shine a laser at a camera but it may be illegal to own a laser in your state area it is therefore important to confirm the legality of the laser beam. It is however illegal to point a laser at an aircraft in most states in the USA.

What Happens if You Shine a Laser at a Camera?

If you shine a laser at a camera, it will cause physical damage to the camera’s sensors. The light that is produced by a laser produces heat which can cause physical damage to exposed areas such as the eyes or a camera with cameras being more susceptible to damage. When a laser is shone at a camera, the degree of damage can vary. Some of the damaging changes include;

It is however important to note that in order for you to permanently ruin a camera using a laser, you have to be less than 50 meters away from the camera and you have to ensure your hands are very steady so you can point it exactly at the sensor. For this reason, it is difficult to ruin surveillance cameras permanently. Images produced from cameras that have experienced a degree of laser damage to their sensor may have some unreadable data and the videos may also have horizontal or vertical lines across the footage. If you wish to get a laser that will not be hazardous to you and your family as well as your camera, you can try this Battlefire Rifle Scope with 4 reticles and ideal optics for hunting. Read more on it here.

Can You go to Jail for Pointing a Laser?

Laws governing the use of laser beams in the USA vary depending on one’s state. In most states in the country, pointing a laser beam at an aircraft is strictly illegal and can get you up to 5 years in jail or you could be fined. This is because the use of laser beams on aircraft temporarily blinds the pilot in the cockpit and this can be a very dangerous affair. The further a laser beam travels, the more spread out it becomes, which could result in a very bright light illuminating the cockpit. In South Carolina for example, the laws governing the use of laser beams are very strict and only allow the use in the case of self-defense or if hunting. It is also prohibited for a minor to own a laser and if found with one it is subject to immediate confiscation.

The legality of the laser beams also depends on the class of laser being produced. Classes 3B and 4 are classified as hazardous and are therefore not sold without a permit. Class IIIa lasers are legal and I would recommend getting this Lunvon Upgrade Laser Christmas Lights Projection for indoor and outdoor use. Read more on it here.

Can You Disable a Security Camera With a Laser Pointer?

After videos of protesters in Hong Kong disabling cameras using lasers, many have wondered if it is possible to disable a security camera with a laser pointer. As mentioned above, in order for you to damage a camera permanently using your laser beam, two factors have to be considered and these are;

Due to the location of most security cameras, it is difficult for one to disable a camera using a laser beam. It is however not impossible therefore as the owner of the security camera, there are precautions you could take to protect your cameras from the effects of laser beams such as; keeping your camera high and away from people, using a ‘blinding notification’ software, or installing moving cameras to make tracking more difficult. Another factor that makes it difficult to damage cameras by shining a laser at them is the fact that most lasers found among the public are low-energy laser beams and they, therefore, have low penetrability. A laser beam I would recommend that would not damage your camera and would be safe for use in public areas is this NcStar Green Class IIIa Laser with Max output of <5mw which comes with a weaver style mount model. Read more on it by following this link.

It is not illegal to shine a laser at a camera in most states. This is mostly due to the fact that it is difficult to cause any permanent damage to the camera using the laser beam. However, it is not impossible to cause damage to the camera and therefore camera owners need to be wary of lasers pointing to their camera sensors. It is however illegal to shine a laser at an aircraft in almost all states, this is because it could temporarily blind the pilot.

Depending on what you need the laser for, it is important to do your research on it to avoid damaging your eyes temporarily or permanently or even those of people close to you. It is important to use lasers in a safe way to avoid causing any damage.

link to How Do I Get My Car Back From Repossession

Repo-men take your car — everything inside of it as well? How do you get it back? Lots of questions loom over your head as the financial burden that brought you down has now spat in your face and...

Continue Reading
link to Is my Car on a Repo-list?

Missing payments, just made a car purchase that felt too good to be true? Is my Car on a repo-list can definitely pop into your head from time to time, and there has to be a way to remedy that,...

Welcome to my site on effectively surveilling a potential target or preventing those who want to spy on you. We also provide topics that explore the criminal mind. Our goal is to give you the insight to help you make or take appropriate steps to protect yourself against those who would do harm.

This site owned by Creekmore Springs LLC is a participant in the Amazon Services LLC Associates Program, an affiliate advertising program designed to provide a means for sites to earn advertising fees by advertising and linking to Amazon.com. We are compensated for referring traffic and business to Amazon and other companies linked to on this site