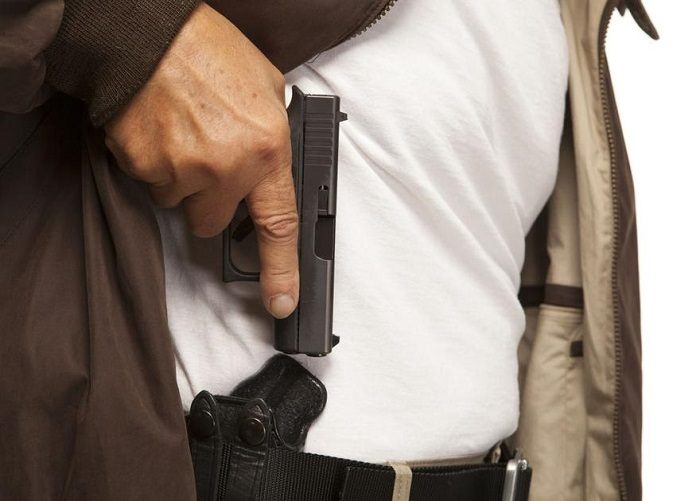 People who own and carry firearms are often confused over a number of things, not least of which is the need to get a concealed carry permit. Many feel that constitutional carry is the only acceptable law regarding the carrying of firearms.

Comments like “The Second Amendment is my permit!” are often heard. In this article we are going to explore the following question: should I get a concealed carry permit?

However, there are many reasons why you should get a concealed carry permit. It does not mean that the gun laws are perfect by any stretch of the imagination; far from it.

What Is a Concealed Carry Permit?

A concealed carry permit gives you the right to carry a weapon, such as a handgun, in a concealed manner either on your person or in close proximity. Not all weapons that fall under this law are lethal. In Florida, for instance, carrying pepper spray with a volume of more than 2 oz. requires a concealed carry permit, whereas anyone can carry a smaller chemical self-defense spray on their person without the need for a permit.

The issuance of concealed carry permits is not governed by federal statutory law. All 50 states have passed laws to allow individuals to carry certain concealed firearms in public, either without a permit or after obtaining a permit from a designated government authority.

Why Should I Get a Concealed Carry Permit?

Carrying a concealed weapon is a big responsibility. It is also an unbelievable privilege if you meet the requirements of your state. There are countless reasons why people choose to carry a concealed weapon, but if you are in any doubt, we have outlined ten different reasons below for obtaining a concealed carry permit.

It Is Your Constitutional Right

The Second Amendment of the Constitution of the United States states that the right of the people to keep and bear arms shall not be infringed. It does not get much clearer than that!

The world has become increasingly more dangerous and crime and attacks can happen anywhere. Should you become the target of an attempted robbery or attack and you use a gun to resist, you are less likely to be attacked or robbed than if you had used any other method of self-protection.

To Protect Your Loved Ones

It is a great feeling to know that, should a dangerous situation arise, you have the means to protect those you care about the most. You are the one that they trust with their lives.

To Protect Others Around You

There are countless examples of potential mass shootings that have been prevented by someone carrying a firearm. Be prepared, and this may just be you someday.

Rather Have a Gun and Not Need It

It is better to have a gun and not need it than to need a gun and not have it. It is like insurance. You most certainly hope that you won’t need it, but if disaster strikes, you are prepared. The average response time of an emergency call is around ten minutes. When time is of the essence, the police may not be fast enough. Having a concealed handgun could literally safe your life.

Your Loved Ones Will Feel Assured

If you are traveling for work or if you are out late at night, your family can rest a little easier knowing that you have your handgun with you. They will feel assured if they know that you have a way to defend yourself.

You’ll Learn a Lot About Safety and Self-Defence

You will have to attend some very extensive training and/or classes in order to apply for your concealed carry permit. Any questions or hesitations you ever had about guns or gun safety will be answered. You will be taught the ins and outs of self-defense. Lastly you will learn all about the gun laws of your state.

Having received this training, those around you can rest assured knowing that you have passed the requirements to prove that you know how to handle a firearm responsibly.

States that implemented “shall-issue” concealed carry laws reduced murders by 8.5 percent, rapes by 5 percent, aggravated assaults by 7 percent, and robbery by 3 percent, according to an analysis of FBI crime data.

Many people who carry concealed firearms say that when they carry them, their situational awareness increases dramatically. In order to effectively defend yourself, you have to be aware of your surroundings. Carrying a handgun gives you a reason to have heightened awareness of everything that happens around you. You become more alert and more aware of your surroundings.

Most people who carry a gun does so because it makes them feel safer. Carrying a concealed handgun can give you that extra sense of security when you go out alone at night or in dangerous areas. You may not feel scared because you’ll know that you have a way to defend yourself.

That does not mean that permit-less carry is not desirable or that people who lawfully do so are less law-abiding than people with permits. That is simply not the case!

Hopefully, one day the law of the land will be constitutional carry. But until then, it is all up to the individual carrier. Whether you get a concealed carry permit or not is totally your decision.