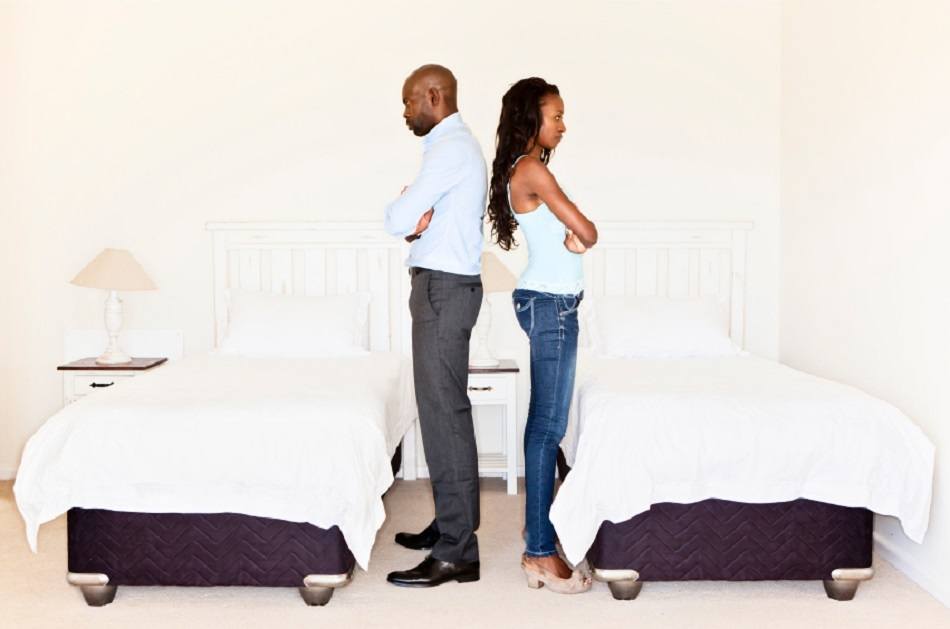 Sexless marriages are becoming more common. Couples stop trying and over time the marriage stays, but the intimacy just slowly flows away like sand through an hourglass. It may even seem like no big deal. Letting your connection to your partner go is not something to take lightly. It’s also true that sex isn’t the only way people connect. Physical sex isn’t the only thing that tends to disappear when the sex goes out of a relationship. There’s more to consider here.

Can you live happily in a sexless marriage? If you want or need to skip the sex, there’s no reason why you couldn’t find happiness. For some, it might be a relief. However, it’s not right for everyone, and you should not stay in a relationship that makes you miserable.

What is a Sexless Marriage

A marriage where little to no sex occurs is considered sexless. Having sex less than once a month qualifies in most cases. The TV family from Married With Children is one overdramatized example. Peg and Al were known to have sex perhaps twice in a year. Though there’s technically some sex in that relationship, it would still be considered sexless.

Statistically speaking about 15-20% of marriages qualify as sexless. Sadly that number may be on the rise. Being super needy, supercritical or failing to talk about what you need can wreck your sex life. Those aren’t the only reasons why sexless marriages happen. Whether it’s emotional distance or just being too tired at the end of the day, the reasons are many, but the result is the same.

Most Sexless marriages are not happy. The partners have trouble with communication, and often one or the other ends up giving an ultimatum. This ends in couples counseling or even divorce. Is that all there is to it? Is sex the end-all-be-all of married life? For some people, yes. Still, others do just fine without sex in their marriage.

Who Chooses a Sexless Marriage

As strange as it may seem to many, some couples choose to live without sex. Religious beliefs can lead to this choice. Some people believe sex is intended only for procreation. Religion aside, there are several other reasons why a couple might choose to avoid sexual interactions with each other. This list shows several practical reasons why sex might not work for a couple who otherwise have a deep and abiding love.

Right choices aren’t always obvious choices. You may need to work toward getting on the same page with your spouse. This can mean increasing one person’s desire to spend time in bed, which is somewhat predictable. Alternately, you may need to help reduce someone’s libidinal urges to make the relationship work for you both.

Increasing libido may be about lifestyle changes. Alternately it can be hormonal and require a pill for either gender. There are some herbal and naturopathic options, but the reviews are mixed. The Vitamin Shoppe suggests everything from Yohimbe, to Korean red ginko and chocolate. While chocolate can certainly create some pleasurable sensations, it’s dubious that it would increase sex drive in the way you might wish. As for the rest, it’s hard to tell without any hard science.

Libido increase and sexual performance for men is different than for women. Both partners can benefit from tactics like revisiting pleasant memories from the past and trying new and exciting things. However, if the problem is physical, it should be obvious that a woman can’t pop a viagra. It’s best to consult a doctor about sexual impotence or other physical problems. For those wanting a natural but effective alternative Click Here to get the latest pricing. This solution works for both men and women.

What if your partner was a victim of rape? Even if you genuinely want to be supportive, sexual urges can drive a wedge between you anyhow. Some people would end the relationship, adopt a polyamorous or polygamous lifestyle, torture themselves or cheat. Fortunately, there are other options. Most of the studies about chemical intervention to decrease libido had to do with preventing sex offenses, but a good physician might be willing to discuss the possibility of progestogens or other assistive measures in such a case.

Medications, especially antidepressants, can decrease libido naturally. Weight gain can have the same effect. Neither of those is a very reasonable way to reduce desire safely. Over time willpower and redirecting your focus into hobbies and other pursuits might help. Be sure you’re making safe and healthy choices if you’re going to do something as drastic as intentionally reducing your libido. For women and men, there is a solution for decreasing your libido offered on Amazon. Click Here to get the latest info.

You cannot simply take saltpeter to reduce ‘urges.’ Not only is it a myth, but it can cause real physical harm such as kidney damage or anemia in large quantities. Conversely, saltpeter can be used in tiny amounts to prevent botulism from becoming a problem in processed meats. The only saltpeter given to soldiers was in their food to prevent death, not erections.

When a Sexless Marriage is Wrong For You

When you wake up wondering how to ‘fix,’ your marriage, that’s a pretty big indicator that something isn’t right. If you’re more committed to the idea of seeing someone else who you obsess over, then maybe you’re in the wrong relationship. There are almost always some sort of indicators even if they vary wildly. People don’t like to admit it, but they know when a relationship is over before they accept it more often than not.

Mend What You Can

If you aren’t happy with your life and the reason is your relationship, then you need to change things. You can sometimes repair a sexless marriage. Sex therapists make a living helping people with this issue.

If you’re passive-aggressive, refusing to communicate and you generally think things should be more like they are on TV or for someone else, then you may be able to get help for the situation. You have to be willing to change, and so does your partner. If you both want the sex back then, by all means, find a solution.  I would also recommend this Guide that could save what you have and make it whole again. Check It Out Here to get more information.

There comes a time in some relationships when, unfortunately, they need to end. Having a partner who doesn’t want sex when you do can be one of those times. After you’ve tried communicating, and discussed your options, there are situations where there simply isn’t an alternative.

If a sexless marriage isn’t an option for one partner and a full sex life isn’t an option for the other, then it’s time to make an amicable split. Divorce is never a fun process, but it can be a relief to both of you if a sexless marriage isn’t going to work. Neither of you should live a life of misery just to avoid some paperwork and drama from your peers.

Choosing to be happy in your life is not about what is happening in one place. That said, feeling like you’re missing something can ruin your experience, not to mention your relationship. Striking a balance in life is harder than it seems, and there are times when the right decision isn’t what you might expect. You can live happily in a sexless marriage, but whether you want to is a choice only you can make.

How do you tell your spouse you want a divorce? Avoid competing with other life events. Don’t break the news at your sister’s wedding for example. Ideally, you should be able to sit down like adults and discuss a separation, but things don’t always go according to plan. If you fear violence or an unreasonable reaction you may want a witness present. Stay calm, be kind and confident. Don’t allow their behavior to change your mind.

Should you stay together for the children? This is very much a matter of choice. Your life might not be better if you get divorced. Perhaps your children have special needs, or you and your spouse are content to raise children together without other motivations for maintaining a marriage. As long as everyone consents and understands the situation, then you’re doing no harm.