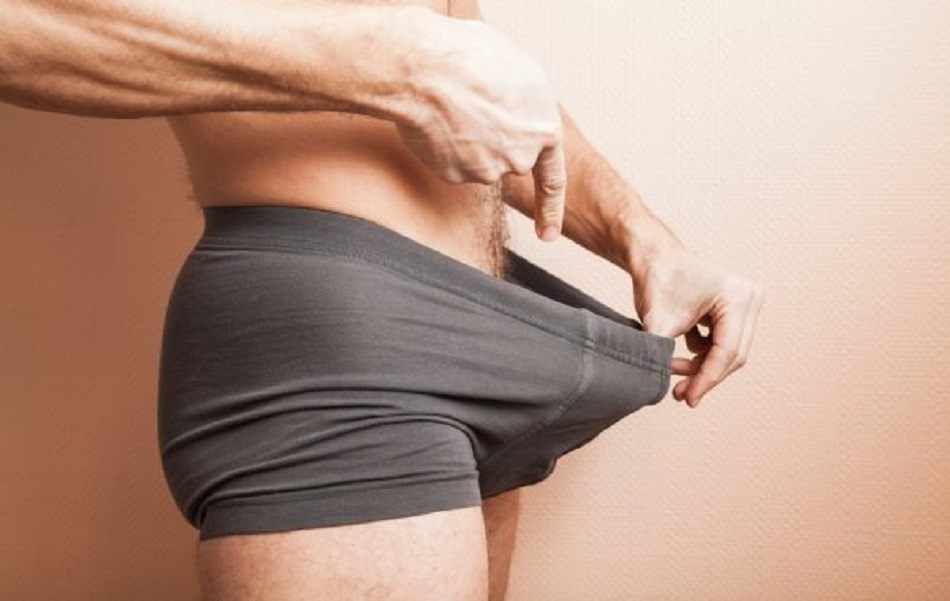 It’s laundry day, and you were putting together a load for the machine when you saw it: Stains in your boyfriend’s underwear. Could it be a sign of cheating? Should you be worried? This is a good news-bad news situation. A lot of stains are normal non-cheating stains, but sometimes it’s a cause for concern.

One important question you should ask is where the stain is located. Even in underwear with holes that never button, most men keep their penises on the inside of the underwear. If you’re looking at a huge white, kind of crunchy or flaky blotch of dried fluid on the outside of his underwear, it’s a lot more likely that some hanky panky happened. However, this is not a guarantee.

If you see two different kinds of whitish or clear-ish fluids in different spots, that may also be a cause for some concern. Men do produce pre-come, but mostly stains from sexual fluids will be pretty uniform.

If there’s white crunchy stuff on the inside and clear flaky stuff (or ‘snail trails’) on the outside of his fly hole, then there’s a fair chance that someone was sitting in his lap when his pants weren’t on. Most men take their underwear off for sex or at least pull them down, but it can happen even if they don’t. Obviously, if you happen to be in a gay couple, the signs would be a little different.

There are forms of non-sexual penile discharge. Unlike sexual fluid, the non-sexual emissions are not healthy and should be a concern for a different reason. Most non-sexual discharge is a sign of illness. If his discharge is constant, off-color, or otherwise happening without any sexual stimulation (even thoughts), then your boyfriend needs to see the doctor. Worse still, you probably need to get tested as well.

These discharges can resemble standard come stains. They can range in color and thickness. Some are watery, others much more viscous than regular seminal fluid. White, clear, yellowish, greenish, brownish, bloody, or pink are all discharge colors that can occur.

If you suspect the bodily fluid in the briefs is real, you might want to use a black light. It might at least settle your suspicions. I recommend the Vanky Ultraviolet Blacklight. To get more info on this flashlight, Click Here

If you and your boyfriend are sexually active, and he has an STD, in all probability you’ll get it from him if you don’t have it already. You both need to get tested regularly. Moreover, if you were tested and came up problem free, and you’ve been monogamous, any STDs that pop up along the way are from your current partner. This isn’t a universal tell, however, because some STDs can take a while to show up on a test.

Unfortunately, unless your first date was hitting up a doctor’s office for an STD test and your second date didn’t happen until you got the results together later, there’s no way to be entirely sure your partner is clean in advance. Getting a clean bill of health when you start a new relationship should be a common practice, but it’s not.

For many, it’s just too costly, and they either lack insurance, or it’s not covered. Additionally, lots of people won’t admit they’re too scared the test might find something they don’t want to know about. If you both had a clean bill of health and he suddenly develops an STD, he is likely to have gotten it from someone else he sees on the side.

So now that we’ve established that it’s not usually easy to tell why there are stains, but you understand that it’s normal for them to happen, let’s discuss abnormal underwear behavior. Most of the time, you need more than one indication that someone is cheating. Strange changes in underwear use can help you spot a cheater.

When you’ve been together a while, and he doesn’t usually have any stains, but they suddenly start happening every day, you may want to pay closer attention to your boyfriend’s comings and goings. By itself, this can be a natural peak in his sexual activity, but it could also be cheating. That’s not the only weird thing men do with their underwear.

If you notice he’s buying a lot of new underwear, but you never see him wearing it around the house, it’s odd. If he does this and those same underwear make it to the laundry basket be aware. If both those things are true and he never goes to the gym or anywhere he’d need to change after, and there are stains only on the new ones then you may be looking at a cheater.

Have you found his underwear in strange places? If he stops putting them in with your laundry that’s bizarre. Furthermore, if you find them hidden, under things, in drawers or his car, especially with stains on them, that’s definitely worrisome behavior. It’s not the smoking gun that finding a pair of women’s underwear in your sheets would be, but it’s too unusual to ignore.

As mentioned, using a blacklight flashlight might give you a better indication if any stain in his underwear, sheets, car seat, etc…you suspect might be bodily fluids. If it glows, your suspicions might be true. To get the easy to use Vanky Blacklight, Click Here.

When you’re worried about possible cheating, it can overwhelm you. You may even become slightly irrational. The most important things to remember are that first, not all partners cheat. Even if you’ve had a bad past experience, it’s not a guarantee. Second, you need to be sure before you confront or accuse your partner. Look for more evidence than seeing some stains.

You may be right, but it’s not worth ruining a good relationship if you only have a suspicion based on some questionable evidence. Check out the rest of Catch Cheaters Fast for more tips and tricks to help you establish the truth. We have lots of great articles on how to catch a cheater.

Does sperm dry white or clear? Sperm are microscopic, but healthy seminal fluid can dry either white or clear. On a darker material, it’s more likely to stand out as whitish. Naturally, on light or white material, the opposite is true. Stains can be almost invisible if the color or pattern of the material is a close enough match.

What is the clear liquid that comes out before sperm? Sexual discharge confuses a lot of people. The pre-come as it’s often called is not fertile by itself. That means it doesn’t cause pregnancy. What it can do is transmit STDs or even pick up sperm that is left behind, which could cause an unexpected pregnancy. For this reason, among others, the ‘pull out’ method is a terrible way to prevent impregnation.

Is discharge normal for women? Yes. While some significant details vary, almost all women experience discharge at some point. Depending on where a woman is in her sexual maturity spectrum and what point her menstrual cycle is at in the month, it may be more or less. Some have it every day, others very rarely, and this can change as they age.