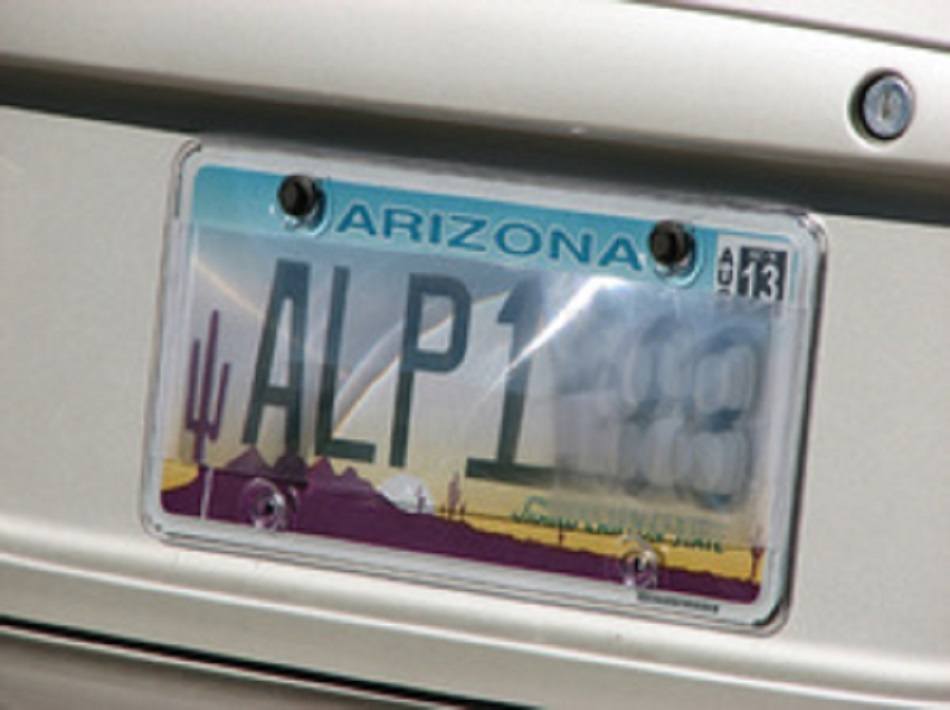 Traffic tickets are a pain. No one likes getting them. Moreover, with so many police departments converting intersections into camera monitored stops, it can feel a lot like living in some dystopian future. Big Brother is watching you. Naturally, you shouldn’t be blowing through lights, but that doesn’t mean that people can’t try to fool the system. More alarmingly, a crazy ex can have you followed and filmed. I’ll walk you through ways people have attempted to thwart cameras, but keep in mind that you do so at your own risk.

Warning: Using any of the following methods to prevent traffic cameras, toll booths, or police from seeing your license plate numbers is illegal in most states.

People have tried all sorts of crazy things to keep cameras from seeing their plates. From tinfoil to plastic wrap, there are lots of ways to fail at obscuring your license plate. Don’t jump on the latest internet trend just yet. Here are some of the ways that don’t work.

Be wary of people who promise you ‘tricks’ to get out of tickets. You should be aware that, even if they work, the police are reading the same pages you do on the internet. In short, you’re not fooling anyone other than yourself with that sort of thinking. Don’t waste your time on cheap gimmicks.

How To Obscure Your License Plate

Assuming that you’re serious about keeping your license plate off of cameras, there are some practical ways to cover it up. Technology has come a long way. As cameras have evolved, so have devices that can keep them from seeing things clearly. Here are four ways to obscure your license plate.

Without a doubt, the best way to keep your license plate off-camera is never to encounter it in the first place; or at least never set one off. I’m sure you’ve seen the chunk old versions of police scanners that some folks drive around with. However, this is a new era, and we can do a lot better than that.

New problem evading scanners have several useful abilities that their predecessors lacked. Not the least of which is red light and camera alert features. Why settle for outdated equipment when you can have an inclusive device that helps you do more than slow down for intersections?

You can easily get a Radenso XP Radar Detector from Amazon. It has GPS lockout, so you won’t have to hear false alerts along routes you drive regularly. Plus, a host of other tools like radar sensors, a one-year manufacturer’s warranty, and no ticket guarantee to keep you safe. As a bonus, it doesn’t cover your license plate, so you can’t get in trouble for that, no matter where you drive. For prices and availability, click here.

Your second choice for preventing a camera from spotting your license plate is a straightforward concept. A cover for your license plate that has anti-flash treatment on it. From the rear, when you look right at them, you can read the numbers. However, the side view is warped, and it’s evident that something is covering your plate.

The treatment on these unique plate covers helps reflect light. A diffuser scatters the light waves, making them ‘read’ differently from anywhere other than directly behind your car. When you can’t avoid being on camera, this is a decent second option.

You may have seen these Anti-IR plate covers on TV before. Both police and news reporters have made a big deal out of how effective they are. Sadly, the downside to choosing a reflective cover is that they are pronounced.

Anyone looking at the license plate can tell what they are, or at least that there is something over the plate. However, when it comes to coverage, they tend to do well, keeping a camera off your digits. Also, to be fair, they aren’t any less noticeable than an anti-radar scanner on your dash.

It’s not difficult to find an excellent anti-IR cover to protect your plates from weather and prying cams. The Zade License Plate Cover from Amazon prevents any flash photography. Moreover, they not only diffuse light, but the curved design can help bounce radar lights off of your license plate. To find out more, click right here.

Another great option to cover a license plate is the remote curtain. Although most drivers who use these original roll-down plate covers do so for public display, the curtain will cover your plate regardless of where you are. Not only does this keep off cameras, but even prying eyes can’t peep your digits by getting close enough.

The concept is simple, drop a curtain over your license plate. Once you have it installed, you can hit a switch on one of these ingenious devices an have your plate covered in roughly one and a half seconds. Whether you’re concerned about hiding your license plate numbers at a car show, or just while it’s parked in a public garage, this is the way to go.

I would not suggest driving around with your license plate fully covered, as it’s illegal in every state. However, unlike some options, there’s no angle that you can read the plate from since it’s quite literally a retractable covering. Remember to retract your cover before you head out on public streets, and you’ll be fine.

To choose the peace of mind that comes with certainty, opt for a full cover. You can find the highly effective Innovativeparts Stealth License Frame on Amazon. It comes with a remote for easy use, and you can even have it installed professionally when you don’t want to waste your time at home. However, installation is easy enough to do yourself if you prefer. Click here for more details.

Flip Out or Retract

Similar to the curtain cover, both retractable and flip frames will keep cameras or anyone walking past from seeing your license plate. Although they handle things a little differently than the cover, they do the same job.

A flip frame is almost exactly what it sounds like. The structure is designed to flip your license plate around backward. People use these for anonymity in public places like swap meets where you might be selling out of the back of your car.

Retractable frames can be hard to come by. Mostly they are specialty items designed for high-performance show cars. Ferraris and similar sports cars can have a retractable plate installed. This keeps the owner anonymous when the vehicle is not for sale.

Many, but not all, states have laws explicitly prohibiting you from obscuring your license plate. As much as a traffic ticket sucks, penalties can get as serious as a felony. Depending on where you are, plus how and why you evade the camera, you might have been a whole lot better off getting a ticket.

Alternately, if someone is illegally surveilling you, like a stalker or crazy ex, then protecting yourself is a sensible course of action. If it’s legal to do so, making your license plate invisible to a camera could help protect you. Always consult your local laws, and report stalkers.

Choosing to obscure your license plate is a solemn decision. Even in states where it’s legal, it could be considered interfering with police.