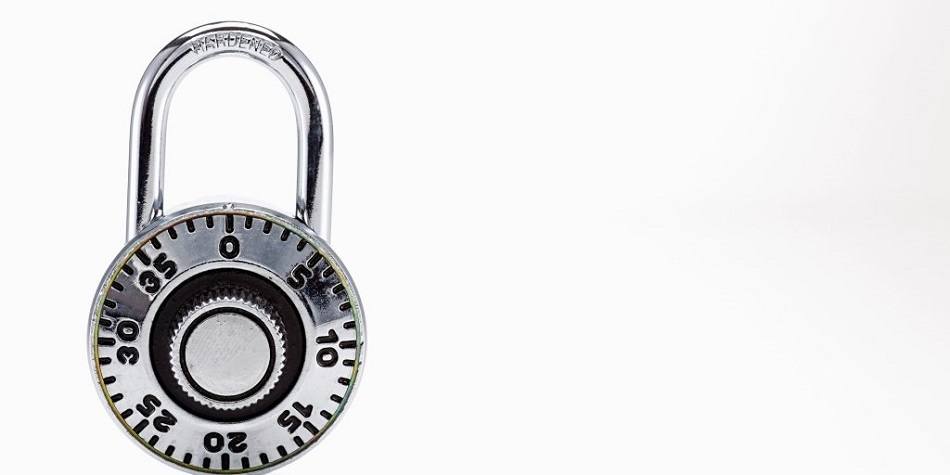 When there’s trouble in your relationship, locking up everything vital is a solid plan. Unless you want to spend a thousand dollars plus installation fees on a safe, a good padlock is essential. It can keep out a soon to be ex-wife or a crazy boyfriend. Choosing the right lock can be problematic, but I’ll help you figure out everything you need to know to make the right call. Protect your private information the right way.

There’s more than one level of combination lock security. The trick to how they work is surprisingly simple. Rotating dials move grooves into place, so a bar with a notch can slide back and forth.

One wrong number, and you end up with a lock that won’t open. All of the groves have to be in the right position to allow the bar to pass. Sure, there are ways to pick any lock. Fortunately, most people have no clue how to make that work.

Naturally, if you’re dating or married to a locksmith, then you need a different system. However, typical spouses can no more pick a lock than they can run a four-minute mile or design a roller coaster.

The simplest mistake to make when purchasing a combination padlock is choosing a cheap, three number dial. Realistically, three dials, and ten numbers (zero through nine) have seven hundred and twenty possible combos. Although that seems like a lot, it’s not even close to enough.

A person with reasonably nimble fingers can test one combination, or more, every second. With sixty seconds in a minute, some basic fifth-grade math will tell you everything you need to know. Your cheater will have that lock open in under twelve minutes if they’re genuinely determined.

Even if your philandering partner is a little slow, they can check every possible numerical combination in under an hour. Assuming you sleep for the usual five to eight hours, they’ll be in and out of your personal paperwork before you realize they didn’t get up to go to the bathroom. That’s no good.

Finding a combination lock with four or even five dials isn’t tricky. Hence, rule one for upgrading is that more is better in this case. You can also add a second padlock for good measure. People are very visual creatures, so it’s not hard to convince them your security is uncrackable by making it look more complicated than it is.

With four dials, they’re facing ten thousand possible combinations. Luckily, that’s a whole lot more than twelve minutes. Even if the tester has incredibly nimble fingers, they’ll need around three hours per lock to open them.

Scale it up with extra locks, and you multiply the time. Two or three will take them the better part of a day. More if they’re slow or lose count. Who has that much time, uninterrupted? Your cheating spouse doesn’t.

I recommend the Master Lock 178D from Amazon. Four dials are more than sufficient to keep prying partners out of your private property. However, this particular lock has a sneaky bonus. You can reset it as often as you like. So, instead of letting your cheater crack the code, foil their attempts. You can find out more here.

Some lousy spouses are worse than others, so your combination padlock could use extra security in a different way. A smart cheater might not be able to crack the code on a lock. However, when they get desperate, it could still occur to them to cut the shackle.

Fortunately, like most problems, lock makers have had centuries to work through the issue. The solutions were simple and elegant. First, they could change the length of the hasp.

Sadly, that’s only useful to a point. A longer shackle might let you lock up more, but a too short hasp doesn’t fit anywhere. Then someone invented the shackle guard. A lip that extends upward from the side of the locks’ body keeps bolt cutters at bay.

Typically these hardened guards are enough to defeat sharp cutters. Some combination locks go a step further and include better deadlocks. From prying to rapping, there are lots of ways to get inside a lock, but the right deadlock can resist most attacks.

Unlike an ordinary lock, the deadlock requires a second action to open the latch internally. Hence it is merely another way lock makers found to keep prying fingers out. Like the shackle guard, it’s good to have a deadlock feature on your combination padlock.

Resultantly, when you need more security than usual, you can still get it from a padlock like the Master Lock 1177D ProSeries on Amazon. The shackle guard combines with a resettable combination to make the whole lock a lot harder to defeat. You’ll be pleasantly surprised by how effective this lock is at keeping people out. Check out the reviews right here.

Plenty of people think that any lock will do, but some combination padlocks are far more secure than others. However, anyone who was, or had a snoopy younger sibling and a lockable journal can tell you that basic locks aren’t beneficial. For example, a cheaply keyed lock, like the ones on novelty handcuffs, can be defeated by a single piece of stiff wire.

Worse still, it doesn’t even take skill. First, you bend the wire. Next, you stick it inside and slowly rotate it until it comes up against a moving part. The internal piece that moves when you turn a bent wire inside those cheap little locks is the only thing holding the shackle closed. When you move the piece of metal, it unlocks the lock.

The beautiful thing about a combination lock is that there’s no keyhole to worry about. Not only does that mean that a set of lockpicks can’t defeat your lock, but you also can’t jam the lock. Snapping of keys or anything else inside a keyed lock can make it impossible to open.

More importantly, a combination padlock typically uses multiple rotating disks to keep the shackle in place. That means you’d need to move more than one part inside the lock to get it to open. Arguably, this makes even the most basic combination lock more secure than a keyed lock. Although many would disagree, I feel that, with padlocks of roughly equal quality, the combination lock is the better choice.

Just like my kids-journal padlock, a cheap combination lock is easy to defeat. You can open a low-quality dial-based combination lock with a hammer. Though there’s nothing wrong with making an economical choice, your locks are not the place to cut costs.

A super-cheap combination lock can also be easily opened by putting pressure on the shackle and spinning the dials. Most people can feel the subtle differences as the opening slides into place. However, a false gate is there to trick the senses.

The gate makes it feel like you’ve put the tumbler in the right spot. Unfortunately for would-be thieves, a false gate won’t let you open the lock. Alternately, that’s good news for you because it means there’s one less way to crack your code.

Another thing that can wreak havoc on your combination padlock and compromise its’ security is the weather. Extreme cold and heat can affect how locks work. Regardless of whether your cheating spouse knows that, you don’t want to get locked out of things that were worth protecting in the first place.

Moisture will rust a too cheap lock, making the shackle easier to cut. Furthermore, internal rust is impossible to see. You don’t want your combination padlock to keep you out. Hence a weather-resistant lock is much better. Even indoors, moisture, and temperature fluctuations happen.

It’s so hard to get everything you want in one place. I scoured the internet for a combination padlock that had everything I wanted. There’s a security rating system for most locks. It’s numbered one through seven, with the higher number being more secure.

My favorite combination padlock is the Squire CP60CS. It has a security rating of seven for a good reason. In addition to being programmable, and having a hardened steel shackle guard, the Squire is weatherproof. Additionally, the company offers a ten-year warranty because they believe in their product. Furthermore, it also has a five-digit code. That means the CP60CS has a hundred thousand possible combinations for someone to guess. To get this lock from Amazon, click here.

No one wants to deal with a cheating spouse. Fortunately, you can keep your essential paperwork, or personal items secure with a great combination padlock. Regardless of rumors to the contrary, the right lock is very secure.

Most people don’t realize how easy it is to defeat a cheap padlock. Luckily, there’s no need to settle for low quality. These locks have been around since the mid-sixteenth century, and they’ve certainly come a long way.

When hunting for a combination padlock to secure your belongings, always read the specifications. Look for a security rating of six or seven, and find one with a programmable code or shackle guard.