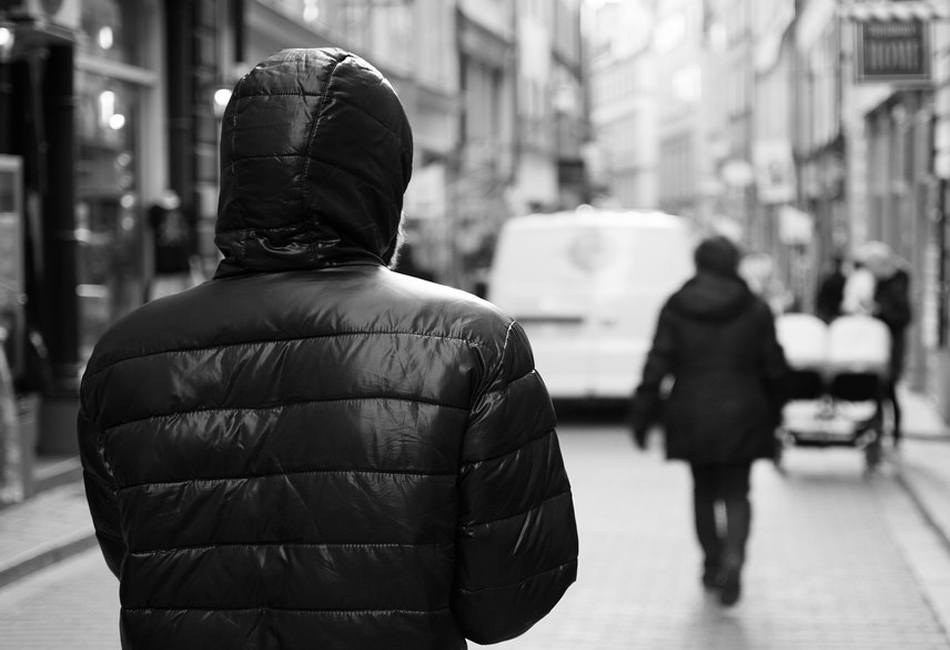 You’re walking down the street, minding your own business and you realize that the same guy has been following you for several blocks. Is he window shopping? Is he headed the same direction you are? Maybe you’re being paranoid, but if your instincts say there’s trouble you should always listen. It can be hard to know what to do if you aren’t completely sure your follower is breaking the law.

What is the difference between stalking and following? Realistically, there are three ways to see it: Stalking, following and being investigated. Following is the easy one. If it is a single incident or an accident encounter it’s following. Stalking has many hallmarks. Generally, it means someone has a pattern of behavior that involves aggressive intentions. It’s frightening and unwanted. With stalking there’s usually a direct threat. Being investigated implies there’s a legal reason. Some people, like law enforcement, have the right to obtain information about you for valid reasons.

How can it be legal to follow someone if stalking is illegal? Honestly, it’s about the intention. If you are behind someone in traffic, you’re following them. There’s no intention in this; it’s a coincidence. If the follower has no goal, then it’s innocent. Even if someone alleges stalking that doesn’t make it true.

No matter how much we may like our space, occasionally following happens. It’s unavoidable when people travel in the same direction. As obvious as it seems, sometimes paranoia can be the actual problem. If you’ve been hurt, it’s easy to see the dark side of everything. There are times when there’s just nothing to it.

One easy way to tell if you’re being followed is to leave. Accidental followers don’t typically go with you. Make lots of turns or stop moving. Someone who is merely traveling the way you are won’t follow you everywhere. They only stick with you when it’s on their route. If you stop, they should pass you and keep going.

Rare as it is, sometimes a person will follow on purpose. This isn’t necessarily stalking. They may want to know something legitimate about you. Perhaps they think you are a friend of theirs. Maybe they want to ask you out.

Conversely, they might have a warning for you. If you’ve stepped in toilet paper or something is hanging from your car trunk they may wish to let you know. Once in a while, you drop something and a good samaritan is trying to return it. In short, not all following is a bad thing.

Private Investigators and law enforcement agents can go too far just like anyone else. They are human after all. Fortunately, they typically don’t cross the line where stalking is a concern. Most often if you’re legally under surveillance and you notice they will stop. Someone else has to take over the job to avoid detection. The whole point of this manner of observation is to get information. When you know you’re under surveillance, it changes how you behave.

Surveillance is allowed because the intention is not harmful. Collecting evidence is intended to clarify legal matters. This should ultimately help people. Investigators have licenses and reasonable justification. For example, an insurance company might want to know they are paying a claim to someone who is genuinely injured. They may hire a professional to verify that the claimant is going to therapy and not participating in MMA events on weekends. Plenty of good reasons exist for following someone.

Following may be harmless, however stalking by definition is the opposite. First, the attention is unwanted. Stalking causes most normal people to become afraid. Stalkers have patterns to their behavior, and the intent is generally to harm or frighten the victim. Stalking behavior tends to escalate as time passes. Often, the stalker becomes bolder and more willing to cause damage.

Unlike following, stalking has to happen more than once and with ill intent. Also, while both stalking and surveillance frequently have elements of information collection, the intended uses are very different. A professional is minimally invasive. Pros get paid not to get noticed. Avoiding detection allows them to learn what they need. Also, professionals know how to avoid legal pitfalls.

A stalker wants you to notice them. They’ll go out of the way to make sure you see them or know they were there. Attention and validation are part of the point. Control of the victim through fear can include high visibility and extravagant gestures. Vandalism and overt threats are one form of this behavior, alebit a particularly unpleasant one. Though, legally speaking a stalker doesn’t have to do physical damage to be breaking the law.

There are times when a stalker isn’t always so obvious. Low profile stalking is either better thought out (premeditated) or perhaps just the beginning of a longer pattern. Fortunately, there are signs you can keep an eye out for that will tip you off.

What to do About Stalking

Surely calling the police and getting a restraining order is all you need. Right? Many people think so. Unfortunately, because stalking doesn’t necessarily leave evidence, it takes a concentrated effort to prove it. First, you want to be sure it’s not an overactive imagination. Likewise, law enforcement wants to be sure they’re not wasting their time.

While you establish the truth, stay safe. Use common sense and don’t allow yourself to get cornered. It’s far better to be paranoid than hurt or worse because you didn’t put in the effort when you weren’t certain it was needed. Err on the side of caution.

You might want to consider picking up a couple of personal protection devices. It is always better to have multiple instruments so if one cannot be used, you have a couple of more to stave off a potential bad guy/gal.  They are compact and discreet. The defensive tools I recommend  are a personal alarm, stun gun, pepper spray, and everyday carry pocket knife. These items are available on Amazon. Just to be safe, I would also highly suggest to find out the local and state laws on carrying these self-protection items.

Keep in mind that letting someone know their attention is unwanted is an excellent first step in later proving stalking happened in court if necessary. Always be clear when you feel like someone has gone too far. Though it’s rare, merely telling someone to back off can stop them if they aren’t a stalker. You may want to turn on your camera phone when you do this, in case it doesn’t go well.

Often the best approach is the simple one. Hire a PI to ‘stalk’ your stalker. They can legally follow the person who is disturbing you and record a chain of events that will be useful in court. A professional makes a great witness. Though you have to pay for the service, it’s worth it. Your life is worth more than a retaining fee and the cost of pro services. If you can’t swing it, then keep a clear record of everything as it happens. Try and get witnesses and pictures or video.

Whether you are reading this because you’re afraid of a stalker, or you want to monitor what someone else is doing, it’s the same. Stalking is bad news, and the intention is to hurt someone. If you’re going to go after someone legally, like in divorce court, be very careful. Courts issue restraining orders readily enough despite the difficulty of proving stalking charges later. If you receive one, it will complicate your life substantially.

What is gang stalking? When a group of people work together to perform surveillance it’s sometimes called gang stalking. Group harassment tactics are more common than you may expect. Sometimes it’s law enforcement who use these tactics to terrorize people.

Can someone look in my windows legally? If you leave curtains open then people are allowed to look at what they can see from the street or their own yard. Conversely, even police may be subject to legal repercussions if they intentionally sneak around to peep in windows. There are some reasonable circumstances when they can do this, but otherwise, it’s illegal. Most of the time, if the person looking had to sneak around to reach the window, it’s probably not legal.

How common is stalking? Around 15% of women and 6% of men have been stalked. To put it differently, 7.5 million people a year are victims of stalking. Most stalkers are either acquaintances or former lovers, but not all of them are, stalkers can also be strangers.