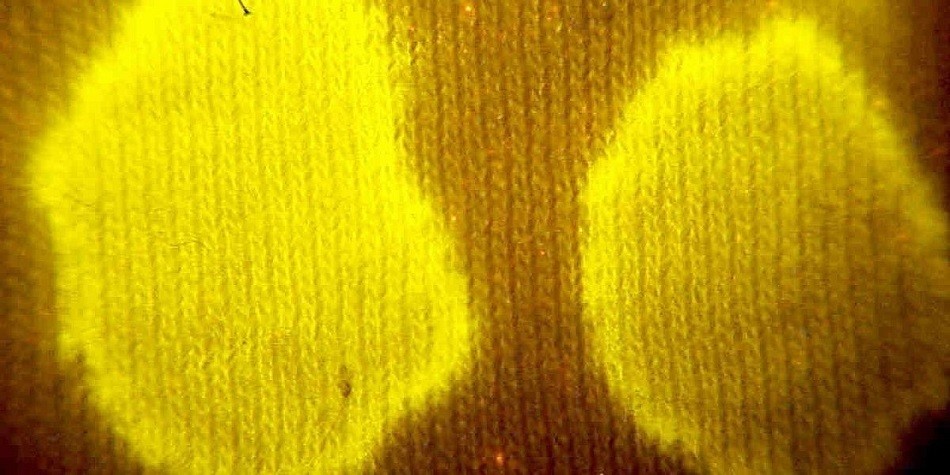 Blacklights are good for more than psychedelic posters and night clubs. There are numerous rocks and even animals that fluoresce under the glow. From fish to scorpions, there are plenty of natural pigments that show up as bright as day. Cat pee and fabric softener are among the more interesting liquids that glow, but what about humans?

What To Do if You Find Discharge That’s Not Yours

Being the victim of cheating is horrible. It can ruin your relationship and your life. You may be looking at court fees and other costs as a result. Hopefully, you had a prenuptial agreement, and you’ll be compensated fairly. However, you have to prove your case first. Sadly, sometimes there’s nothing you can do, but if he got stains on his clothing or other fabrics, you’re in luck.

You can send a sample out for DNA testing. Infidelity testing is a common practice. Before you take that step, you may want to talk to your lawyer. As of 2012, there were a dozen states that forbid collecting and testing genetic material without permission. The ethical and legal ramifications can come back to bite you even if getting the test done is easy. Don’t risk invalidating the evidence when checking the local laws is as easy as asking the right questions.

If you don’t find the evidence you need at first, it’s okay to keep looking. You know your spouse better than anyone else. If things have changed, you’ll notice the subtle signs even if it’s nothing you can pin down. Feeling suspicious and paranoid is terrible for your health. It can cause anxiety and a whole lot of stress.

When you’re positive, something is out of place, you need to know the truth. Asking isn’t always the best way to tell, which is why you can and should check up on your suspicions. The truth can hurt, but it’s better than finding out later down the line when you end up with an STD or an unexpected set of divorce papers being handed to you. Protect yourself and your interests by checking for discharge with a blacklight.

Where Should You Look

If you’re going to hunt for evidence of spilled body fluids to prove infidelity, you should probably look everywhere. Some of the most popular places to have sex, other than your bed, are on this list. Even if you think your spouse isn’t very sexually adventurous, he may have used a more unusual place to conduct his affair so you wouldn’t find evidence. You should grab a good handheld blacklight to make a quick survey of the obvious choices. Make sure it’s as dark as possible so you won’t miss anything.

How Does a Blacklight Make Things Glow

A blacklight uses ultraviolet radiation to produce that distinct purple glow you see. The energetic radiation in the light reacts with a number of different substances by exciting the particles, and the result is a visually identifiable glowing. Most mammals don’t glow, but humans and flying squirrels are among the exceptions.

Forensic scientists use blacklights all the time to see more of the story at a crime scene. Luckily, you can also use your own blacklight to see if your spouse has been cheating. Of course, you have to be careful since you could mistake female discharge for many other fluids that also show up.

Always use more than one method to check for infidelity where possible. You don’t want to ruin a good relationship over a mistake. Still, it’s a great way to find out if, for example, your husband has had a woman with no underwear sitting on the top of his desk. Because people also glow, you may even see a distinct print of the buttocks, legs and even women genitalia.

Can You Tell Female Discharge From Other Fluids

The answer is yes, and no. Female discharge is not as bright under a blacklight as come. Because of the particular chemical composition male bodily sexual fluid is the brightest. As for female fluids, unfortunately, we can only say that it’s not going to glow as bright. Very little research has been done on the topic. Moreover, the results can be conflicting because different lights can vary the fluorescence. We like the Keenstone if you’re looking for a small portable flashlight/blacklight option, Click Here.

Probably not, at least with a blacklight. You can look for the skin prints in different sizes and shapes, but other than that, it’s not likely that you’d be able to know or prove they are from different women without some other method of testing. We suggest that you put in a spy camera like the ones we review in our other articles to catch your cheaters in the act.

There are new polymers created by medical scientists that might show you if one woman has an infection. However, the technology is relatively new. Plus, you would be hard pressed to get your hands on any of the bacteria detecting fluorescent gel as a civilian.

If you can collect samples, then you’ll be able to have each one tested. While DNA can absolutely tell different people apart, there are limits. Many services don’t check extensively enough to tell twins apart for example, or parent and child if they have a lot of the same DNA (it’s not a 50/50 split as you might think). Moreover, testing various stains can get expensive quickly. A single test can be as cheap as about $120, but if you want to test five or ten different fabrics, you’re looking at spending nearer to a thousand dollars.  Equally important, while the test can tell people apart, the lab will never tell you who it is even if they know. It would violate confidentiality.

No one wants to find out her husband is cheating. Yet, it’s better to know for sure than wonder forever. As awful as it feels to have your trust broken, you can’t move forward until you’ve faced the facts. Proving that it happened is the best way to be sure. Only then can you begin to consider what steps to take next.

What’s the difference between a blacklight and a UV light? Technically there is no difference. A blacklight is a UV light. UV is divided into three different categories, UVA, UVB, and UVC light. Blacklights are just a specific type of UV light.

Can UV lights be other colors? As a matter of fact, they can. The UV lights in a tanning bed, for example, lack the purple filter used un what you think of as a UV light. This allows the full spectrum to shine through.

How else can I detect female discharge? Other than blacklights, female discharge can be detected in many ways. Only genetic testing can prove it, but you can often see a stain. If it’s fresh, or there’s a lot of it dried, you can feel the discharge. Alternately, you can also smell female fluids, especially if there’s an infection like BV that makes it smell strongly unpleasant. Finally, and most disgusting, you can taste female discharge. However, we want to strongly suggest that you never ever go around licking things to see if someone had sex on them. You could get hurt, sick, or infected.